Tap Your Way to a Bestseller! 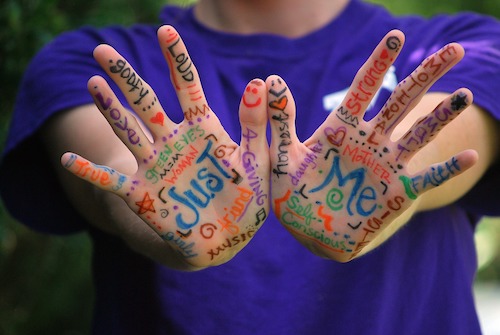 One of my favorite ways to break open my creativity is EFT Tapping.  Emotional Freedom Technique was developed in the 1970s and initially used to treat psychological disorders – especially post-traumatic stress syndrome.  Now EFT is used more widely to relieve pain, lose weight or release blocks to financial or relationship success.

It is deceptively simple, fast and non-invasive, so the technique has its share of skeptics.  But during the last two decades, several peer-reviewed scientific studies have shown its effectiveness.  (This article in the National Library of Medicine at the National Institutes of Health outlines some of those studies.)

So, what is this magical practice?

“Emotional Freedom Technique is based on the combined principles of ancient Chinese acupressure and modern psychology,” according to The Tapping Solution. “It is a powerful holistic healing technique that has been proven to effectively resolve a range of issues, including stress, anxiety, phobias, emotional disorders, chronic pain, addiction, weight control, and limiting beliefs.”

Sounds cool, eh?  I use it to dispel my brain’s crazy-talk about my writing.

It’s really easy and painless to do.  You focus on a negative belief you hold about your writing, your creativity, your productivity, whatever.  (E.g., “I’m not disciplined enough to write.”)  Using your fingertips, you then tap on certain meridian points on your head and upper chest.

By connecting the mind and body, the technique releases old, blocked energy and helps rewire the brain.

OK, OK, I know this sounds really weird.  I am from California, after all!

But studies at Harvard Medical School conclude that stimulating your meridian points (the same points that acupuncturists stimulate) reduces activity in a part of the brain called the amygdala and reduces cortisol, the “fight or flight” stress hormone.

The amygdala is part of your body’s limbic system, which influences motivation, emotion, survival instincts, learning and memory.  Anxiety, depression, PTSD and phobias are thought to be linked to abnormal functioning of the amygdala – disorders that challenge our survival instincts or are triggered by buried emotions.

“[EFT] Tapping has been shown to literally ‘turn off’ the amygdala, disrupting the stress response and allowing the brain synapses to be rewired for a more appropriate emotional response to a given situation,” writes Nick Ortner on TheTappingSolution.com.  “The body is equipped with an energy system that travels along pathways known as meridians. Tapping on these meridian endpoints helps to stimulate this system, and when verbally or mentally addressing the root causes of distress, the areas of blocked energy are able to release and flow naturally.”

I coach my clients (and myself!) using tapping as a means to release negative beliefs and replace them with more empowering, inspiring thoughts.

Here’s how it works:

Focus on your negative belief, really feel it.  Feel the fear.  Feel the shame.  Feel the guilt.  Whatever your thought is, find the corresponding emotion and let that feeling flood your body.

While tapping with the fingers of your right hand on the side of your left hand (the “karate chop” point), say out loud:  “Although I’m angry with myself for not being disciplined enough to write, I deeply and completely love and accept myself.”  Say this out loud three times while continuing to tap on the side of your hand.

Then, move through the meridian points outlined in the diagram on the next page.  At each point, shift what you say.  “I’m so angry with myself…”  “Why can’t I discipline myself?”  “I’ll never get my book done.”

Shift to language that reinforces the type of thinking and behavior you want:  “I am disciplined.”  “I am excited to write my book.”  “Writing my book is easy for me.”  Use present-tense, positive phrases.  Move through all the points two or three times repeating these positive phrases.

Finish at the top of your head and take a deep breath.  Check in with your initial negative emotion and see if it still feels as strong or true.  Sometimes, a new negative belief will emerge.  You can tap that out, too!

You might yawn as you tap, or get a little weepy.  That’s OK, it’s just the energy shifting.  There are free videos at www.TheTappingSolution.com to illustrate how to tap.

I also like this article from Psychology Today that explains how tapping works.

Try tapping away those nasty beliefs that sabotage your writing and you might just find yourself dancing around with your new book! 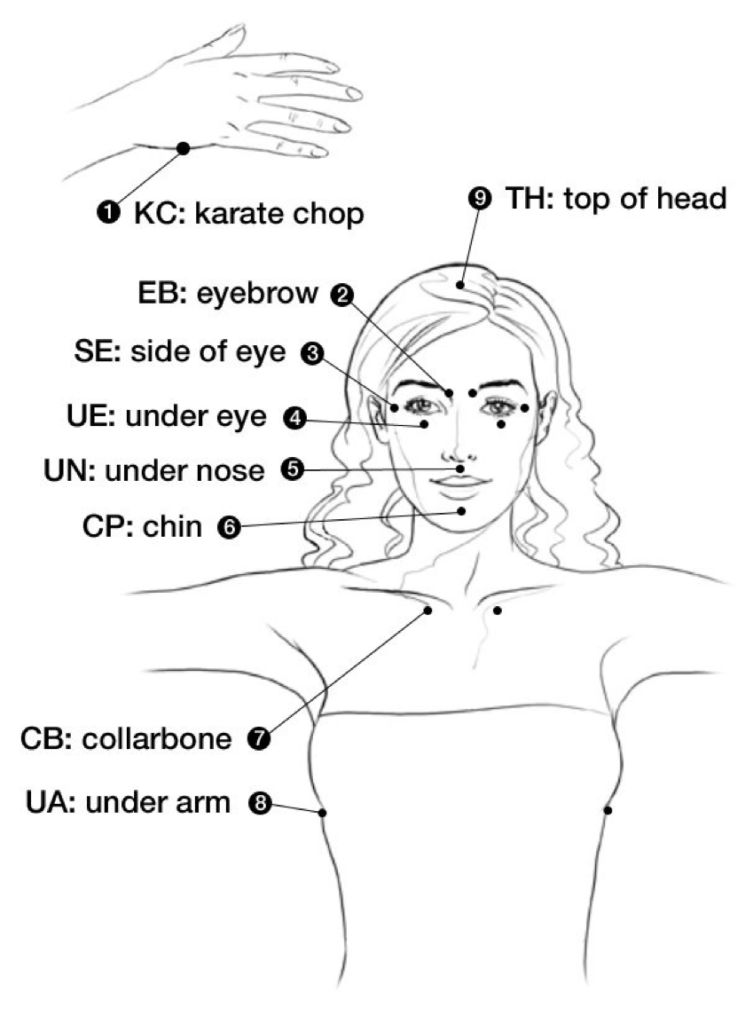 Eyebrow Point (EB)
Where the eyebrows begin, closest to the bridge of the nose.

Side of Eye (SE)
On the bone directly along the outside of either eye.

Under Eye (UE)
On the bone directly under either eye.

Under Nose (UN)
The area directly beneath the nose and above the upper lip.

Chin Point (CP)
This is the area just below your bottom lip and above the chin, right in the crease.

Collarbone Point (CB)
Starting from where your collar bones meet in the center, go down an inch and out an inch on either side.

Under Arm (UA)
On your side, about four inches beneath the armpit.

Top of Head (TH)
Directly on the crown of your head.

Have you ever tried EFT tapping?  Any tips?  Share in the comments. 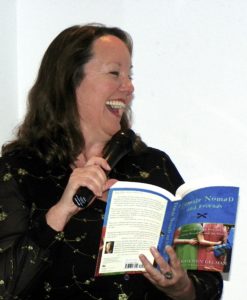